Mountain Gorillas are generally massive creatures with short thick trunks and broad shoulders. Their eyes and ears are dwarfed by their large head and a hairless, shiny black muzzle. Older males develop a crown of muscle and hair that makes the head look even longer. The arms are longer than the stubby legs. The fully adult male mountain gorilla is a lot bigger than the female adult Gorilla.

The most serious threat to gorillas is habitat loss due to encroachment of their habitat by the locals as farmland. The rich volcanic soil of Virunga is highly valued as farming land in Rwanda, Uganda and Congo. A regional conservation program stressing the importance of maintaining the virgin forest watershed and the need to habituate some groups of gorillas for tourist visits has helped reduce the problem of encroachment.

Gorillas are pretty shy creatures but the young ones are rather ferocious and treacherous. They usually seek no trouble unless provoked; they are very protective of their young. Family groups are very closely knit together and may make up to 5-30 members and it usually consists of at least one older male, one or more females and a few juveniles.

Mountain Gorillas have strong attachments to members of their own group and even when groups meet and mingle and then subsequently part, each animal tends to remain with its respective group. Each group is led by a dominant silverback, serving as its chief protector and defender. Gorillas these beautiful creatures spend their day moving around in the forest feeding and resting throughout the day. The dominant silverback decides for them when it is time for them to move to greener pastures with an abundance of food and water.

Animals of this size have to feed a lot to stay strong and healthy throughout the day. Although they eat a variety of plants, they have their favourites like wild berries, bamboo, thistles, stinging nettles and bedstraw. These plants tend to be juicy and therefore provide adequate water for these animals and in cases where there is not adequate water, they are able to survive.

Mountain gorillas have fairly a slow rate of reproduction. Females give birth for the first time at about age 10 and will have more offspring every three to four years they normally carry one child at a time but just like humans, twins are not unheard of. A male begins to breed between 12 and 15 years when he is in charge of his own group.

Newborn gorillas are weak and tiny, weighing about 4 pounds. Their movements are as awkward as those of human infants but their development is way faster. About 3 to 4 months, the gorilla infant can sit upright and can stand with support soon after. The young one feeds regularly for about a year and is gradually weaned at about two years when it starts depending on solid food.

The gorilla’s biggest threat is mankind and Crocodiles too are potentially dangerous to lowland gorillas. In West Africa, gorillas are commonly hunted for meat or in retaliation for crop-raiding. Poachers have also destroyed entire family groups in their attempts to capture infant gorillas for zoos, while others in the past have been killed to sell their heads and hands as trophies. 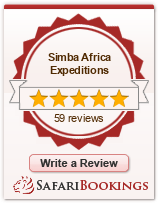